His opening remarks harkened back to the late president George H.W. Bush’s memorable speech asking Americans to be of service to others as part of “a thousand points of light.”

The Governor asserted, “I believe we have many points of light in Algiers and in Greater New Orleans that we can be proud of.”

The growth of Ochsner’s Westbank campus, new owners of Avondale Shipyard, the establishment of Deep South Studios with plans to be one of the largest film production studios in the Southeast, and the replacement of the Belle Chasse Bridge are shining “points of light” exemplifying how development and investment will improve the lives of Algiers’ residents.

The governor also highlighted expansion beyond Algiers, including economic development occurring up and down the Mississippi River. The Port of New Orleans’ plans for a $1 billion multimodal facility in Meraux will create jobs while the replacement of the Belle Chasse Bridge will improve access to and from the West Bank. 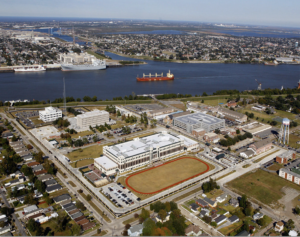 At the luncheon, Entergy, a New Orleans Business Alliance Leadership Investor, announced its annual $10,000 contribution to the AEDF.

The New Orleans Business Alliance salutes the efforts by the Algiers Economic Development Foundation to bring industry and economic development to the West Bank.

“It’s always an honor to welcome the governor to an event highlighting economic development in New Orleans,” said Quentin L. Messer, Jr., president and CEO of the New Orleans Business Alliance. “We’re proud of the great work taking place in the city and honored to have a partner like the AEDF driving economic growth on the West Bank.”

Thank you for the very valuable personal and business contributions each of you make to the Algiers Economic Development Foundation.

In just the past four years, you’ve helped attract $200 million in new capital investment to the Algiers community and helped create more than 1,700 new jobs.

I’m impressed by both your vision for the Algiers community, and your results.

In just a couple of days, former President George H.W. Bush will be laid to rest in Texas, and we’ve reminisced in the time since his death about the remarkable speech he delivered at the GOP Convention here in New Orleans some 30 years ago.

President Bush would later say about his famous “thousand points of light” that there can be no definition of a successful life that does not include service to others.

“Service to others” is our highest calling.

Let that be your guide in making the Algiers Economic Development Foundation a point of light to this community and to our state.

One thing that I never forget as Governor is what a remarkable state we have, full of remarkable places and extraordinary people.

I was delighted at the invitation to be here with you today because I believe we have many points of light in Algiers and in greater New Orleans that we can be proud of.

Let’s look at some of them.

Ochsner Medical Center’s Westbank Campus is one of those points of light.

When Becker’s Hospital Review listed Ochsner as one of America’s 100 great hospitals this year, it noted the Ochsner system’s growth from a modest beginning of five physicians, to more than 1,200 physicians today at 30 hospitals with 18,000 employees in Louisiana.

Louisiana’s many healthcare assets are why we have been successful in expanding Medicaid to now cover 481,500 additional adults in our state, with more than a quarter-million new doctor’s visits, over 56,000 additional women screened for breast cancer, over 70,000 adults receiving essential mental health services, and over 40,000 adults newly diagnosed for diabetes and hypertension, and now treated for those conditions.

This progress has helped us save lives in the Algiers community.

We’ve seen billion-dollar private investments believe in the West Bank and its hard-working people — take a look at the Cornerstone Chemical Company/Dyno Nobel project in Westwego.

I was just recently down here to announce a buyer for the Avondale Shipyard.

That developer, Avondale Marine, includes a venture partnership of T. Parker Host and Hilco Redevelopment Partners who are seasoned in the maritime logistics industry.

Over time, investment at the Avondale site will open the window to 2,100 new industrial jobs, with growth over the next two decades forecast to bring more than 5,000 total new jobs and an eventual new annual payroll of over $6 billion.

That’s based on preliminary estimates for projects that are still in the planning stages, but none of this growth would be possible on the West Bank without the widening of the Huey P. Long Bridge.

This will do for Belle Chasse and Plaquemines Parish what the improved Huey P. Long Bridge is doing for Elmwood and the West Bank.

Yes, the complete project will require a private toll partner, because the cost will exceed $125 million, but we are combining federal, state and private dollars to bring a safe, advanced traffic solution to Belle Chasse that will improve quality of life for everyone.

I’m grateful for DOTD Secretary Shawn Wilson and State Sen. Troy Carter for their leadership on this important project.

And speaking of infrastructure, where would we be without our ports?

In Louisiana, we offer 5 of the Top 15 ports by tonnage in the entire United States.

Brandy Christian’s team at the Port of New Orleans is crucial to our plans for growing Avondale; the port also is expanding its Napoleon Avenue container cargo services; it continues to build passenger cruise service to record levels; and the Port of New Orleans is engaging in long-term plans for a potential $1 billion multimodal, container and business park in Meraux.

We also are exceedingly proud of the Port of St. Bernard, which supports nearly 1 of every 5 jobs in St. Bernard Parish, and contributes $325 million in annual economic impact.

After becoming governor, I directed DOTD and worked with the Legislature to double the funding of Louisiana’s Port Priority Program for port expansion projects that support the growth of jobs and imports and exports. [$20 million to $40 million per year]

It’s one of the best decisions we made.

Our ports, like our communities, are all in this together; and it’s through their partnership and through organizations like the Ports Association of Louisiana, that we can continue to grow waterborne commerce that supports our entire economy.

Many more exciting developments are under way here.

We’re proud that the State has had a role in helping Deep South Studios implement its plans for the one of the largest design-built film, television and digital media production studios in the Southeastern United States.

Our Louisiana Entertainment office at LED estimates that Season 5 will push total Louisiana payroll for the duration of this series to more than $180 million.

We are accomplishing great things together for our state, because of what you’re doing here and up and down the Mississippi River.

I can tell you I’m tremendously excited about the results we’re seeing.

Just since the beginning of our administration in January 2016, we’ve attracted 113 major economic development projects. These projects represent over $30.7 billion in new capital investment to Louisiana.

That investment is resulting in the retention of 19,000 jobs at existing companies that are expanding in our state.

And those projects are resulting in 27,500 new jobs associated with existing employers in Louisiana and with new companies that are coming to Louisiana.

This is the leading wave of economic growth in Louisiana, yet it’s only part of the story.

In addition to that new investment and those new jobs associated with over 110 new economic development projects that we’ve won, we’re also seeing broad growth in the state’s economy, because we have stabilized Louisiana’s fiscal standing and we have cultivated a climate of growth.

We’re investing in our schools and training our students to claim the best jobs of the future.

According to the latest report from the Bureau of Economic Analysis (BEA), Louisiana’s economy grew at a rate of 4.3 percent in the second quarter of 2018, outpacing the national average of 4.2 percent. The state’s Gross Domestic Product (GDP) is at an all-time high, and at the same time, wages are growing once again.

And we’re enjoying the lowest unemployment rates our state has seen in a decade.

There’s never been a better time to find a job in Louisiana — from construction to chemical manufacturing to agribusiness to entertainment to cybersecurity to healthcare and financial services.

Our momentum is real, and I truly believe that this is only the beginning.

May God bless Algiers, New Orleans and the great State of Louisiana.

*as prepared for delivery